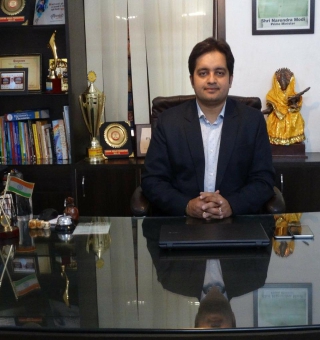 He hails from Bareilly and with his dedication and commitment he has raised himself to be a well-known face in Bareilly and the nearby places.

After doing his post- graduation from U.P.T.U., he started his career in 2005 with WIPRO.

During his job at WIPRO, he had a fascination towards doing something for the society and imparting education could be the best way for it, So, he decided to quit his job and came back to Bareilly and joined Padmawati Academy in 2007. With just 180 students in 2007, Padmawati Academy under his able leadership has now 1200+ students & approx 2400+ students have passed class XII from 2009 till date.

In 2012, he started Edutree Consultant to educate school owners and, so far, he has helped in establishing in around 28 schools all over India & presently he is a consultant of 9 schools.

There was another feather in his cap, when in 2013 he was elected as Secretary of Independent Schools Association (ISA) Bareilly, which is a body of 35 affiliated schools from CBSE & ICSE Boards.

So far, he has conducted many training workshops for teachers and parents in different schools.

Now, throwing some light on his family, he got married to Khushboo Arora in 2009 and has two daughters Saanvi and Naysa.

Currently he is taking care of two schools in Bareilly.

Apart from giving his services in the field of Education, he is also heading BNI as Regional Director in Bareilly.

He is working enthusiastically in different capacities. He is an illustrious educationist and known for his empathetic concern towards society.