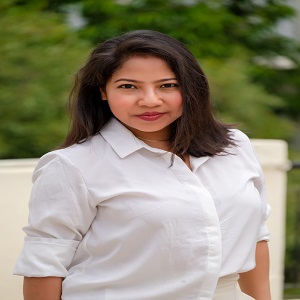 Anindita Das is an award-winning advertising creative director and the author of Amazon's bestseller ‘What The Pandemic Learned From Me’. In her career spanning over 13 years, her name has been associated with reputed agencies like Wunderman Thompson, Dentsu Aegis Network, and Cheil Worldwide. She has launched and relaunched some of the hottest businesses, scaling iconic big-budget brands as well as written for socially driven causes with no or low budgets. Her words have been given voice to the world’s most loved furniture brand, the most on-time airlines of the country, the highest-selling car of the nation, a high-fashion brand, a color cosmetic, a retro Bollywood FM channel, a well-known refrigerator brand, a high-end smartphone, several leading hospitals, a garam masala, a leading newspaper, an IPL team, a ruling government, a pizza, a biscuit and many more. As a result, her work has earned her several prestigious awards and accolades in creativity and effectiveness nationally as well as internationally, including Spikes Asia Festival of Creativity,
The One Show, Global Healthcare Awards, Effie India, and Goa Fest India. she wrote the most important campaign for acid attack survivors – ‘Donate a Face’ - the first-of-its-kind campaign that opened an important dialogue on the needs of the survivors and helped build the environment for the historic Supreme Court directive to make the treatment of the survivors free. In 2020, while battling with isolation and the mental challenges brought on by the pandemic, Anindita channelized her creativity and wrote her first book, ‘What The Pandemic Learned From Me.’ The book launched on 14th June 2021 was written as a modest pursuit to provide relief to the people struggling during lockdown with an important message on mental health. Within 2 days of its launch, the book trended as a bestseller in the humor and self-help categories on Amazon and till now has been featured in DNA, The Print, Business Standard, Washington DC Despatch, European Sun-Times, Wallstreet Sentinel, East Mojo, Innfinity.com and The Literature Times amongst others.