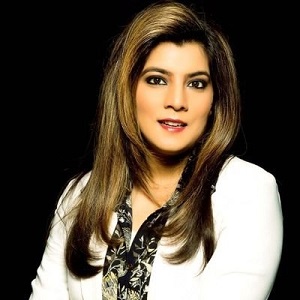 SAHAR ZAMAN is a political newscaster, cultural curator, and artist who is credited with creating a niche for contemporary art, taking it out of the weekend special space, and placing it in daily mainstream news. Her beautifully shot documentaries, interviews, and artist profiles have captured India’s growing heft in the international art scene. She has spearheaded the importance of reportage on issues such as IPR, freedom of expression, art market value and also busted a major fake art racket in the national capital. In the news business since 2001, she is currently the prime time face for the Times Network, conducting debates and shows on current affairs, national politics, and social issues.
She has run news campaigns on women's safety, child protection in schools, farmers’ plight, elections, citizens’ rights, etc. She is also a regular columnist for the Times of India, National Herald, and other prominent publications. As a TEDx Speaker, she has spoken about her unique journey in both fields of journalism and the arts, stressing the importance of doing your work with conviction, even if it is unchartered territory. The popular monthly Mind Mag listed her as the top 5 journalists of India who are doing things differently. Sahar has co-founded Hunar TV, Asia’s first web channel entirely dedicated to every aspect of culture including covering festivals, promoting artisans, singers, performers, lifestyle, design, and special interviews with celebrity artists. As an artist herself, she works under the brand name Chamak Patti.
She uses sheets of reflective stickers which are tediously hand cut by her and used in patterns of her design. Her artwork is used to embellish storage trunks, glass bottles, table tops, wooden furniture, walls, kitchen home-ware such as copper goblets, trays, and wine glasses. The brand has also expanded to jewelry and fashion accessories. According to the international book AFG, Sahar’s Chamak Patti is the top 100 globally recognized artwork. Sahar has also curated arts, music, and cultural events with an underlying concern of making all forms of arts more accessible and consequently enriching the lives of the larger public. She believes in curating these events on socially relevant topics that reach out to a larger audience instead of just a restricted niche of the creative world. Some issue-based shows that she has worked on include racism, climate change, and global terrorism, using paintings and installations of artists to speak out the same message. On a very special note, she recently started the festival called Jashn-e-Talat.
This is a multi-performance platform dedicated to the music and films of her legendary grand-uncle Talat Mahmood. With more than 6 concerts across India, the event has seen both established performers and aspiring artists who sing, dance, paint and act in memory of the Padma Bhushan filmstar. This is the only tribute platform for a yesteryear filmstar that uses varied forms of art. Down the years, for someone who started out as a journalist herself, she has now often become a subject of interest for other journalists. Her work has been featured in Femina, Radio One, Times Life, Broadway World, YourStory, Ideal Home, and many other media platforms. In a rich journey of two decades, she has worked with Reuters, Bloomberg, CNN –India, TV Today, ITV Network, and Doordarshan. But for her, this is just the beginning!